Kaduna train attack: How corpses of co-passengers saved me – Survivor

As efforts intensify to rescue passengers abducted by bandits during the ill-fated Abuja-Kaduna train attack, survivors relive their experiences as the invaders held them hostage for one hour, 15 minutes – killing and maiming innocent travelers. ABDULGAFAR ALABELEWE reports.

The survivors recounted how the bandits overpowered the inbound security personnel and took charge of the train. One of the survivors, Shuaibu Adamu Alhasssan said, the policemen on board gave a good fight, but they later removed their uniforms and joined passengers in lying under seats.

Alhassan revealed two people who sat beside him on the train were hit by the bandits’ bullets, adding that, he escaped being shot as corpses of slain passengers fell on him, shielding him where he laid down.

He said, “When they shot the lady beside me, I lied down immediately, then somebody fell on me. The corpse of the lady beside me fell on that person, and I was beneath both of them. That served as a cover for me. While the bandits shot sporadically, none of the bullets hit me.”

According to Alhassan, though he was neither shot nor kidnapped, the one hour and 15 minutes of the attack was the most traumatic moment of his life.

“You are sitting close to somebody this minute, and the next minute, they are hit by a bullet, without you also knowing your chances of survival,” he said.

Alhassan continued, “The train left Kubwa station at exactly 6:30 pm, and the journey was smooth as usual until we got to Jere, then the train started slowing down and we were wondering what was happening because there was no sign of passengers boarding the train. Then it started moving again, and at exactly 7:50, we heard an explosion. The train derailed and stopped.  Before it could stabilize, we started hearing gunshots, and everybody became confused. The train stopped and the bandits took over the train. They boarded Coach 17; when they entered, they shot some people, then they came to our coach.

“As I was lying down, I heard one of them saying Musa, why did you shoot this person? He responded saying he is wasting my time. After 1 hour, and 15 minutes, we sensed the presence of the military. I had never believed that the Nigerian army could be so responsive, they maneuvered their way through the forest to get to our location. They came with over 30 Hilux vans with senior military officers. They started exchanging fire with the bandits, and after some time, the bandits stopped shooting. The soldiers boarded the train and told us that they had taken over the train and we were safe. Subsequently, they started moving those that were injured out.  There was blood everywhere on the train.

Recalling the gallantry of the policemen attached to the train, Alhassan said, “When trouble started, the policemen on the train, actually tried their best, but from my estimation, they were not more than seven, so they positioned themselves. They went close to the doors and started exchanging fire with the bandits.  When they discovered that the firepower of the bandits was overwhelming, they ended up removing their uniforms and everything that will identify them as security agents, then they joined us in lying down. Sincerely, the bandits had superior firepower, there was nothing the policemen could have done.” 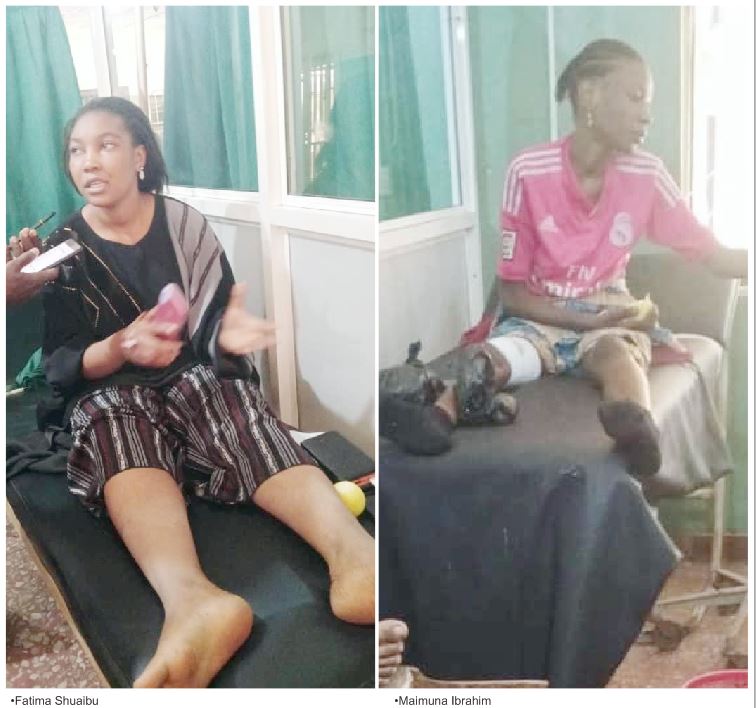 The bandits, he noted, were between 18 and 20 years of age. He said, “They were speaking Fulfude and Hausa. It was only God that saved us. There was no mobile network within the vicinity, except for Etisalat and Airtel which were fluctuating. So it was difficult to call for assistance. It got to a point that when anyone attempted to make a call, and they see a sign of phone light from outside, they just shoot towards that direction.”

“We can’t say how many people died, but they were many, as we struggled to avoid stepping on corpses as we were been rescued. The soldiers really tried because they took us up the hill after being evacuated from the train. They carried several people that sustained injuries on their backs. We also helped in carrying children whose parents were kidnapped, while some people could not find their children.

“Soldiers took over the entire area; we saw some of them in the bush, strategically positioned to respond to any emergency. Then they started moving us in batches in their vehicles to the main road. Later, they advised that those of us that were not injured should walk, and we were surrounded by soldiers. The Nigerian Army provided about 10 buses and ambulances to convey us to safety. They took us to the hospital. Before our arrival, the army’s medical team was already on alert to receive us. So, none of the injured people was left unattended.

“We should be praying for our security agents because they are really trying. Before now, I used to think that they were not doing anything, but after that incident, I realized that they were trying their best but the security challenges are overwhelming,” Alhassan said.

“I have never encountered this kind of horror in my life. It is a very disturbing situation because this is beyond banditry and kidnapping. If their aim is to kidnap and collect ransom, why do they need to waste other people’s lives? who boarded the train with us because other survivors were saying that the bandits were asking them whether they were members of the National Assembly or not.

He said, “It was just God that saved us. So many people were injured. There was a particular woman who was almost hit in the eye, but luckily, the bullet brushed her forehead; her husband was among those that were taken away.

There was also a particular man who went to the VIP section a few minutes before the incident to see someone, he was among those kidnapped. But along the line, when they were been taken away by the bandits, he jumped out of the moving vehicle. He suffered a fracture in his arm. So, he was telling us in the ambulance that he took the risk because he felt it is better to nurse injury than to pass through trauma in the kidnappers’ den,” said Alhassan

An injured survivor, Malam Mohammed Ishaq, said he escaped the bandits’ attack by running away to another coach to hide when he realized they were about to enter the train.

Ishaq, who sustained injuries on his arm while trying to escape said the attack took place about 30 minutes from Rigasa. “It happened exactly 7:35 pm. We were on board the train from Abuja to Kaduna, I think it’s around Jere but you know it was dark, so I can’t say exactly where.

“We heard a loud bang like something blew up. They didn’t target any coach, they were just looking for how to gain access to the train because it was from afar that they started shooting. They were speaking in Hausa but they were Fulani. One was telling the other to use the gun to break the door, then they started shooting the door.

“I heard them asking everybody to come out, and I left many people behind me when I ran. They said the bandits went away with some people. I don’t know how many people were taken away. Later, when the soldiers chased the bandits away, and we went back to where we were seated to carry our luggage, I saw people lying dead,” said Ishaq.

Fatima Shaibu who got injured while running for the bandits stated that they targeted the VIP coach through which they entered the train, adding that the bandits were probably non-Nigerians.

Speaking at the hospital, Shaibu, who is a student, said the bandits were mostly young boys between 18 and 20 years. She said they were speaking some foreign languages that are different from the Nigerian Hausa and Fulani languages.

“When the soldiers came, they had a face-off with the bandits. The bandits were children between 18 and 20 years old and they did not look like Nigerians. They looked like Chadians and Nigeriens because they spoke languages like Fulani, but not purely the Fulani of Nigeria and they are not even more than 20 in number. There was a serious exchange of gunfire between them and the soldiers until the latter overpowered them and the bandits ran away.

“The soldiers and police came inside and rescued us. They took us, including the injured to hospitals, some to the 44 Nigerian Army Reference Hospital Kaduna, and some to St. Gerald (Catholic Hospital Kaduna).”

In her own account, Maimuna Ibrahim, a young graduate who was shot in the thigh said, when the shooting began, she did not hear clearly, the police instruction from inside the train that they should lie down, so she got shot by the bandits, but the bullet went clean through her flesh.

She said, “I know that we suffered, but again we are thankful to the Nigerian Army and the police. They really helped us because they came to our rescue and brought us to the hospital.”

2023: My fears for Ndigbo, by ex-Anambra Deputy governor

GUYS!! Can You Approach A Girl Who Is Under 22Year For A Serious Relationship?

Would You Marry A Girl With A Past Like This? (Read With Discretion)