The Supreme Council of Ukwa Ngwa Youths, an umbrella body of all youths Association in Ngwa Nation said that Senator Theodore Ahamefula Orji’s stand on power shift to Abia North Senatorial zone is misleading and capable of disrupting the peaceful political atmosphere in the state.

They therefore advised Abians and the general public “to jettison the purported statement credited to the Senator, describing it as “unstatemanly and undemocratic for an individual to arrogate to himself the sole prerogative of determining the rotation of the office of the state governor.

This is contained in a press Release they made available to news men in Umuahia, dated March 10, 2022, signed by the President General of the group, Comrade Dannie Ubani, and Secretary General, Chetachi Ahukanna.

They are reacting to a statement credited to Senator Orji, the former Governor of the state, who spoke in support of zoning  Abia Governorship seat to Abia North Senatorial Zone .

According to the group, the statement was made during “a meeting purportedly held at T.A. Orji’s  Umuahia residence which purportedly had in attendance representatives from the 17 LGAs”.

The group said that they were irked by the said statement, which they described as being in conflict with the provisions of Abia chatter of equity founded on two political blocks of Old Bende and Old Aba divisions.

“The Abia chatter of equity was never in any manner founded, premised and anchored at the basis of Senatorial districts, they stated, adding that it is never a creation of Abia chatter of Equity,  “but a manipulative after thought of a tiny political incubus under the leadership of the then Governor,  Chief Orji Uzor Kalu”.

They alleged that Kalu aimed it at perpetuating his stranglehold on power at the expense of old Aba zone,  “which is in outright negation of the letters and spirit of Abia chatter of equity”.

“The old Bende division held the governorship position for 16 uninterrupted years while the old Aba division would have had a mere 8 years stint at the completion of Governor Okezie Ikpeazu’s administration in 2023.

“Equity, good conscience natural justice and fair play demands that what is good for the goose should be equally good for the gander, especially where this gander is the chick that lays the golden egg for the entire Abia state.

“Assuming without conceding that anybody has such powers, it should be the leader of the state, the Governor”, they declared.

They therefore advised Abians and the “general public to jettison the purported statement credited to Senator T.A.Orji as such is misleading and capable of disrupting the peaceful political atmosphere in the state”. 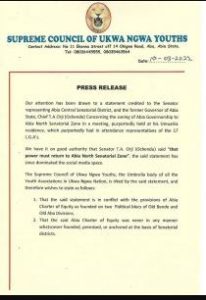 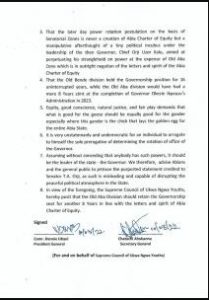