A Nigerian lady has taken to her social media page to share a note she received from her man while performing her duty as a church Usher yesterday.

According to the note, the man went straight to the point as he told her he likes her and would like them to have genital meet-and-greet.

Sharing the photo, she wrote;

So yesterday i ushered this man to a seat in church and he quickly dropped a paper in my hand, i forgot to open it, Opened it this morning and this is what i saw😳😳 i’m weak!!!!! 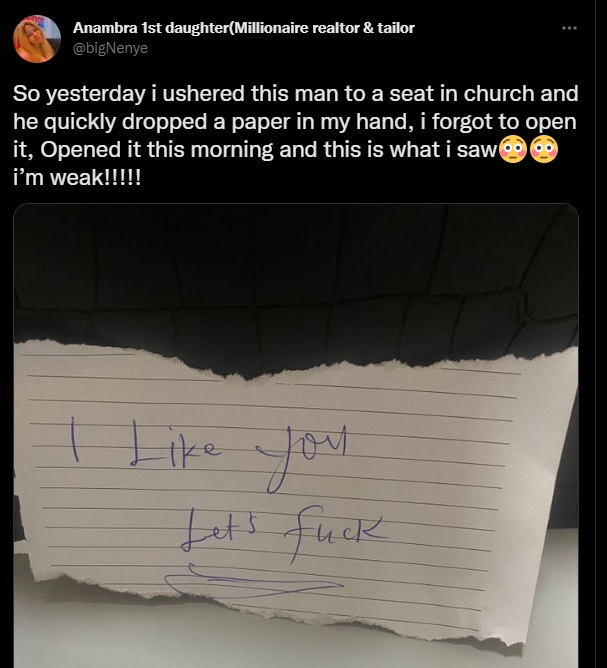 However, Twitter users felt her story was bogus because the note was too neat for something that might have been squeezed into her hands.

The paper is too neat sha. And how would he write it before knowing the usher that would usher him in.

Did he write it from home or inside his car and knew he’d meet you? How did he hand it to you and there’s no crease? As an usher, you’d have checked the content too in case important but ok

Make una dey chase this clout with sense abeg. Imagine you held a paper with you for about 20 hours and it’s still straight like that? No lines,no signs of being squeezed? Did you iron the paper?

Red Eyes (Blood In My Eyes), What It Means, And What You Should Do – Expert reveals

3 Types Of People On WhatsApp Status Users (Which Category Are You?