The Lord’s scriptures taught us that in the latter times, false prophets will emerge and do great works and wonders in order to mislead.

The head pastor of the Church ‘The Secret Of Life,’ located in Kwesimintsin in the Western Region, was photographed washing a female member’s body with anointing oil. 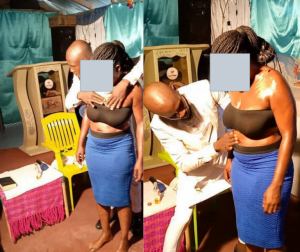 During the deliverance, the pastor, known as ‘Slim Dee,’ was seen in the video administering anointing oil to the lady’s abdomen and breasts.

According to the victim, the so-called man of God or pastor stated that it was a divine command.

The lady told her story as follows:

According to the lady, when she went to her friend’s church for prayers, the so-called pastor informed her that she had received a vision concerning her.

She went on to say that the pastor told her that demonic spirits are with her, which is why she is having difficulty getting married.

To cast the bad spirits away, she must remove her clothing and allow the pastor to apply anointing oil to her body.

The stranded lady consented to the pastor’s request. After the pastor put anointing oil on her body, he began fondling her.

According to the stranded lady, the pastor slept on her after applying the oil to her body and fondling her as part of the miracle of driving out the bad spirits.

She went on to say that she was not the only person who had this happen to her. She was also escorted by a striped n@ked woman.

Nigeria’s Hairiest Woman Finally Shaves off Her Beards, says she wants to To Look Iike A Woman (Photos)